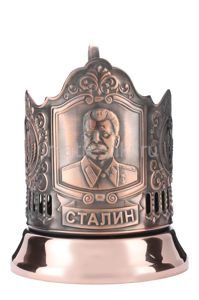 The Stalin cup holder is an interesting and unusual gift for those who love history and appreciate things related to the Soviet era. Coasters is a Russian invention, which was especially widespread during the Soviet era, so they are associated with the events of the 20th century.

The portrait of the Generalissimo is located on the front of the cup holder, on the sides – the official emblem of the Soviet Union. The cup holder is made of high-quality brass, strictly complies with GOST. It will be a good gift for a collector, a symbolic, era-appropriate present for an older relative or colleague.

Now the products cause a pleasant nostalgia, and they have become so diverse that they are increasingly being bought as a gift

There are no reviews yet.